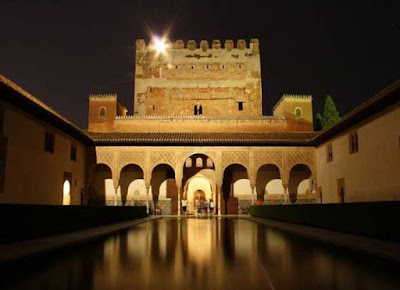 One day teacher of English B said to teacher of English A, “Some weekends ago I arranged an excursion with a teacher, to go around the hillside of the Alhambra and Sacro Monte, in Granada – if possible, don’t miss a trip to Granada, if you let me tell you.

The point of the story was that at the beginning, starting his SUV, he told me he had a terrible cold – I could see it, so I had asked him. I told him that if he was sick we could put off the excursion for another day. Anyway, he simply told me that he did things despite his personal circumstances, kind of something like what you have to do must be done. I’m bad, so what? He said this in simple terms, not arrogant, in a plain way, easily, with some humor, in a serene mood. I liked the sentence, and I’ve gotten and drawn more conclusions lately, for daily work and life.

You know, we had fun: the sunset; we strolling around the impressive Alhambra, the muslim palaces; Sacro Monte; the valleys... still green. I didn’t know I could find so awesome places close by the city. It’s worth to follow my friend’s saying. What you must do should be done – as much as possible: keep and stay calm. And you’ll get enthused more often than not.” / Photo from: pocketguia es. palacios nazaríes de la alhambra. granada

beauty as an educator effort sense of humor teacher's learning